Sometimes, the drama behind your favourite television show’s scenes is more exciting than the screen’s storylines. Acting and producing attract big egos, which often leads to serious conflicts, even on top-rated TV shows who are making the network and the producer’s lots of money.

The 10 actors on this list found themselves fired from popular TV shows after on-set affairs, off-set arrests, diva behaviour, disagreements with co-stars and creative differences.

Actors Who Lost a Role Due to Bad Behavior

Thomas Gibson played Aaron Hotchner, the head of the FBI’s Behavioral Analysis Unit, on Criminal Minds. However, after a particularly heated encounter with the show’s writer-producer Virgil Williams, he was officially fired and written out of the series. Opening up to People magazine, Gibson admitted, ”It took years to make a good reputation and a minute to damage it.“

Megan Fox achieved huge stardom through her role as Mikaela Banes in the first two Transformers movies. However, during the production of the third installment, Transformers: Dark of the Moon,

Fox told a British magazine that director Michael Bay “wants to be like Hitler on his sets” and is a “nightmare to work for.” Yeah, probably not the best things to say about your boss. Not long after, Fox was fired and replaced by Rosie Huntington-Whiteley. The film went on to earn over $1 billion worldwide, which we imagine probably stung a little.

House of Cards star Kevin Spacey was dishonourably dropped from the show after a series of sexual misconduct allegations surfaced about the star, including an alleged assault on a minor.

Filming was briefly suspended following Spacey’s departure, but it has since been announced that a sixth and final season will air soon, focusing on Robin Wright’s character instead.

After years of being a perfect child movie star, by the 1960s, Judy Garland was notorious for her bad behaviour on movie sets, which actually ended up costing her several roles, like in the 1967 film adaptation of Valley of the Dolls.

Cast to play ageing actress Helen Lawson, Garland reportedly upset filmmakers so much with her poor attitude and work ethic that she ended up being fired and replaced by Susan Hayward. Interestingly, Jacqueline Susann, who wrote the book, penned Helen’s character with Garland in mind. Sadly, her dream casting just couldn’t come true.

After her sitcom, Roseanne, was rebooted, Roseanne Barr got it cancelled again following a racist tweet she made targeted at Barack Obama’s former aide, Valerie Jarrett. However,

we now know the series will come back retitled as The Conners and won’t feature the matriarch whatsoever. As they say in show business — “The show must go on” — just without Roseanne.

The Rocky and Rambo star was originally in line to play Axel Foley in the comedy Beverly Hills Cop but was eventually replaced by Eddie Murphy. Stallone was reportedly let go after trying to make too many changes to the script and basically re-write his character.

They say it’s an insult to the chef if you season the food they’ve prepared, so perhaps the same goes for filmmakers and their scripts. Stallone just seasoned it way too much.

Originally cast as Corporal Dwayne Hicks in Aliens, James Remar was promptly fired after just one week of filming. The real reason wasn’t revealed until years later during a podcast interview when the actor finally admitted he was sacked for drugs:

Charlie Sheen was fired from the hit sitcom Two and a Half Men after his erratic behaviour became too much for the showrunners to handle. A letter to Sheen’s lawyer from producers explained why they fired him,

claiming the actor had “been engaged in dangerously self-destructive behaviour” and was “very ill.” His character was killed after falling off a Paris subway platform and being hit by a train on the show. To add insult to injury, this all happened on his character’s honeymoon, and it’s strongly implied that it was his wife that pushed him.

A relatively unknown Jean-Claude Van Damme was originally cast in the 1987 film Predator as the titular Predator, but the role ended up going to Kevin Peter Hall. Why? Apparently, Van Damme wouldn’t stop kickboxing. He insisted his character be a kickboxing alien, and to make this happen, he demonstrated his impressive high kicks to whomever he could find on set. Unfortunately, a kickboxing alien wasn’t really the direction the filmmakers were going, and he was quickly replaced. However, two years later, he would be able to kick as much as he wanted in the film Kickboxer, albeit as a human, not an alien. You can’t win them all.

Scandal star Columbus Short found himself in the middle of a real-life scandal when he pled guilty to misdemeanour domestic violence charges. The actor’s wife filed a restraining order and alleged he threatened to kill her with a knife.

He also pled no contest to a felony assault charge after he threw a punch at an in-law in what he claimed was self-defence and has revealed he’s battled both alcoholism and substance abuse, which resulted in his departure from the series.

Best Colleges for Communications In California 2019

Countries With The Highest Crime Rate 2020 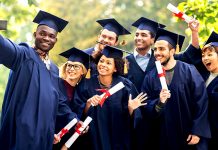 Useful Sites for Every College Student