If you live in Canada, the summer is almost over; there are only seven weeks until the fall season kicks in; you can still enjoy the remaining days of the summer by visiting your nearest beach before Saturday, September 22, which is supposed to be the last day of summer.

As the country with the world’s longest coastline, it’s a given that Canada would have plenty of beaches to choose from. And when you add the many beaches on lakes, you have to agree that we’re pretty spoiled for choice. Picking ten wasn’t easy. But these beaches are some of the best in the land and ones you really should put on your (sand) bucket list.

Canadian Beaches You Must Visit This Summer

Today’s Parent says that Ingonish Beach offers you the best of both when you can’t decide between warm and cold. The calm, warm water of Freshwater Lake is separated from the cold Atlantic by a dividing wall.

Brackley Beach, Prince Edward Island, according to Expedia, Brackley Beach has a particular offering that will appeal not only to the kids but to your inner child too: sandcastle-building classes.

The beach at Grand Bend is the star attraction of this famous holiday village on the shores of Lake Huron. There are two main beaches, with the northern one for the hip and happening crowd and the southern one for families who want something quieter, according to Reader’s Digest.

Long Beach – Tofino, British Columbia, reader’s Digest picked another Tofino beach as one to visit. Long Beach is part of Vancouver Island’s longest dune, and in the warmer months, you can spot grey whales.

Cox Bay – Tofino, British Columbia, Expedia says that Cox Bay is an excellent choice if you’re travelling with kids. At low tide, you may find sea stars and barnacles in the tidal caves at the beach’s northern end. In addition, Cox Bay is considered one of Canada’s best surfing beaches.

How To Get Dental Degrees In Canada

10 Skincare Products With a cult-like following

Countries Where You Can Buy Citizenship

Buying a Used Car While In School 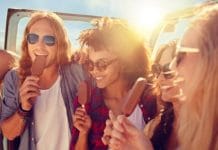 10 Simple Steps to Fly Away from Your Study Abroad Worries