Queen’s University at Kingston is Canada’s definitive university experience. At Queen’s, the university challenge and support in equal measure. When studying at Queen’s, you can expect to be exposed to innovative concepts, different ideas, and new ways of thinking. We will provide you with the tools and resources needed to help you succeed.

The University of Calgary is Canada’s leading next-generation university; a living, growing and youthful institution that embraces change and opportunity with a can-do attitude in Canada’s most enterprising city. The university has a clear strategic direction to become one of Canada’s top five research universities by 2016, grounded in innovative learning and teaching, and fully integrated with the community of Calgary.

8.The University of Western

McMaster University is a public research university in Hamilton, Canada has a 129-year tradition of fueling curiosity, inquiry, and discovery. Every day, they push the boundaries of knowledge through the ground-breaking approaches to teaching and learning and our world-class, interdisciplinary research. McMaster was ranked #4 on our 2018 ranking but it moved down one spot this year.

The University of Alberta is one of Canada’s top universities and among the world’s leading public research-intensive universities, with a reputation for excellence across the humanities, sciences, creative arts, business, engineering, and health sciences. Alberta was rank #6 on our 2018 ranking but this year it moved up 2 spots which is a big rise, Albertain takes their education seriously.

McGill University ranks among Canada’s most prestigious universities, attracting thousands of international students from over 150 countries every year, and the highest percentage of Ph.D. students of any Canadian research university. McGill University owes its reputation to its 50 research centers. McGill was rank #3 on our 2018 rank but this year moved up the ranking. 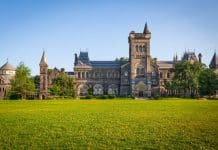