It is no wonder that living in Australia has become a popular choice today, especially with its famous sunny climate and calm culture. The number of expatriates is witnessing a continuous increase and widespread in various states and regions.

It includes multiple age groups, from young people who have recently graduated to retired mature adults. So, do you like the idea of living in a country of sunny beaches and cute kangaroos? Do you find yourself confused about choosing the right city to settle in? Don’t worry. In today’s article, we have compiled a list of the six best Australian towns for you:

Here Are Cities with The Best Quality of Life in Australia

Melbourne, a diverse cultural mix, is Australia’s cultural capital, with a distinct cultural character enhanced by many museums, festivals, and various cultural activities. Not only that, but it is also a favourite city for sports enthusiasts. Residents come from worldwide and from different social backgrounds, which has led to the emergence of diverse neighbourhoods.

Surrey Hills and Camberwell are famous among families with children, while younger groups inhabit St. Kilda. The great diversity of cultural activities ranging from theatres and festivals to street arts and world archaeological sites. A hotspot for athletes, as there are many sports activities such as tennis, cricket and soccer. Thriving nightlife in it. They made it one of the best Australian cities.

Large numbers of different origins immigrants in Sydney made it a city rich in other cultures. The emergence of many festivals of those cultures; as the Sydney Festival in January. This festival includes playing folk-jazz outdoor and has many other events.

It is the capital and most populous city of the state of Western Australia. Its population reached one and a half million in June 2004, making it the fourth most populous country; it is 5386 km2. Despite its distance from many capitals of the world, thanks to its charming beauty and clear development in many aspects, Perth’s Australian state could impose its presence and steal the media spotlight in the recent period, after it became one of the destinations worth visiting.

Perth is characterized by hot and dry weather in the summer, and the winters are often mild, making it an ideal state for those wishing to live in the open air in the bosom of nature. And the Australian state of Perth is famous for the diversity of its religious culture and different places of worship such as mosques, churches and temples. More than 200 different nationalities live in Western Australia to live, work or study in them, to represent more than 100 other religions.

It is the capital of Queensland, Australia, and the state’s most populous city. Its population was 1774,890 in 2003, most of whom were Christian Catholics or Protestants. The town is located near the Pacific Ocean, on the Brisbane River banks, in the plains between Moreton Bay and the Great Dividing Range of Southeast Queensland.

The city is named after the Scottish colonial ruler and astronomer Sir Thomas Brisbane, the governor of New South Wales, Australia. The town is known locally as “Brissie.”

The Australian aborigines have lived in the Canberra region for at least four thousand years. A cave containing wall paintings was discovered in the Gidjani area, south of Canberra. Canberra includes the Australian National Hall of Art, a national library containing nearly two million books; the War Museum is one of its most famous tourist attractions.

In addition to an animal park, the Australian Royal Mint, a city planning exhibition, and the government house built in 1891 AD as a country house at the time. It contained the War College Royal, Parliament, Collection of Botanical Gardens and National Herb Museum. Like most coastal Australian cities, Canberra has four seasons due to its proximity to the beach, and the weather is generally moderate, cold in winter, hot and dry in summer. It rarely gets some snow in the winter.

It is the capital and most populous city of South Australia and the fifth-largest city in Australia, with a population of over 1.1 million. It is a coastal city located near the Southern Ocean, in the plains of Adelaide, north of the Florio Peninsula, between St. Vincent’s Bay and the Lofti mountain range.

Adelaide is often referred to as the city of churches due to a large number of its churches. The Adelaide Festival is held every two years. The Australian Grand Prix is held annually through the city’s inner streets, and a club has been set up at the central railway station in Teres North.

How To Become a Social Worker

How To Become A Freelancer

The 10 Majors With The Lowest Unemployment Rates 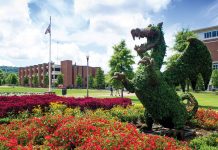 The Happiest Countries In The World 2019