It has been derided by the leader of the free world and accused of influencing elections, but ‘fake news’ is today legitimate news as it is named Collins’ Word of the Year 2017.

The word ‘fake’ was initially used as part of the slang spoken among criminals who wanted to conceal their activities from prying ears. It started as a verb, and it referred to producing a counterfeit or doctored version of something, such as money or documents. This sense of the word may ultimately come from the Italian verb facial, meaning ‘to make. It probably found its way into English as part of a slang called Polari, which borrowed words used between sailors in Mediterranean ports. 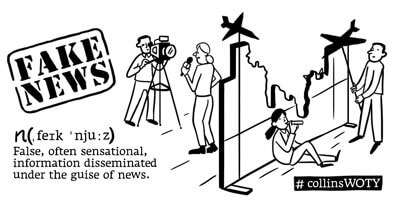 The associate of ‘fake’ with ‘news’ started in the field of comedy, as exemplified by shows such as Jon Stewart’s The Daily Show and Chris Morris’s The Day Today, but around 2005 the term began to be applied to false news stories that were circulated with malicious intent rather than as satire. For example, during the 2016 US presidential campaign, pundits noted many websites broadcasting false stories about the candidates under the guise of news.

Then in January 2017, Donald Trump dismissed reports from the CNN news agency about his alleged links with Russia as ‘fake news.’ Claims that potentially harmful stories were ‘fake news’ and inquiries into the proliferation of such stories were a significant part of the news plan in 2017.

The Longest Serving Monarchs In History

First Day of School for Edmonton Public is Sept 1st