We must remember. If we do not, the sacrifice of those one hundred thousand Canadian lives will be meaningless. They died for us, for their homes and families and friends, for a collection of traditions they cherished and a future they believed in; they died for Canada. The meaning of their sacrifice rests with our collective national consciousness; our future is their monument. 1

These wars touched the lives of Canadians of all ages, all races, all social classes. Fathers, sons, daughters, sweethearts: they were killed in action, they were wounded, and thousands who returned were forced to live the rest of their lives with the physical and mental scars of war. The people who stayed in Canada also served—in factories, in voluntary service organizations, wherever they were needed.

For many of us, war is a phenomenon seen through the lens of a television camera or a journalist’s account of fighting in distant parts of the world. Our closest physical and emotional experience may be the discovery of wartime memorabilia in a family attic. But even items such as photographs, uniform badges, medals, and diaries can seem vague and unconnected to the life of their owner. For those of us born during peacetime, all wars seem far removed from our daily lives.

We often take for granted our Canadian values and institutions, our freedom to participate in cultural and political events, and our right to live under a government of our choice. The Canadians who went off to war in distant lands went in the belief that the values and beliefs enjoyed by Canadians were being threatened. They truly believed that “Without freedom, there can be no ensuring peace and without peace no enduring freedom.” 2

By remembering their service and their sacrifice, we recognize the tradition of freedom these men and women fought to preserve. They believed that their actions in the present would make a significant difference for the future, but it is up to us to ensure that their dream of peace is realized. On Remembrance Day, we acknowledge the courage and sacrifice of those who served their country and recognize our responsibility to work for the peace they fought hard to achieve.

During times of war, individual acts of heroism occur frequently; only a few are ever recorded and receive official recognition. By remembering all who have served, we recognize their willingly-endured hardships and fears, taking upon themselves so that we could live in peace. 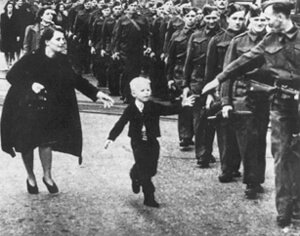 Funeral service for Canadians at Bramshott during the First World War. (Library and Archives Canada PA 4850)

This article originally appeared on Veterans Affairs Canada and was reproduced here with permission.

What Companies Are In The Consumer Services Field

International Student What Credits Can I Claim On My Taxes

Is doing onlyFans Worth it ?

Critical Global Issues In The World In 2022

The Biggest University In The World 2022

How Students With Disabilities Can Be Successful In College